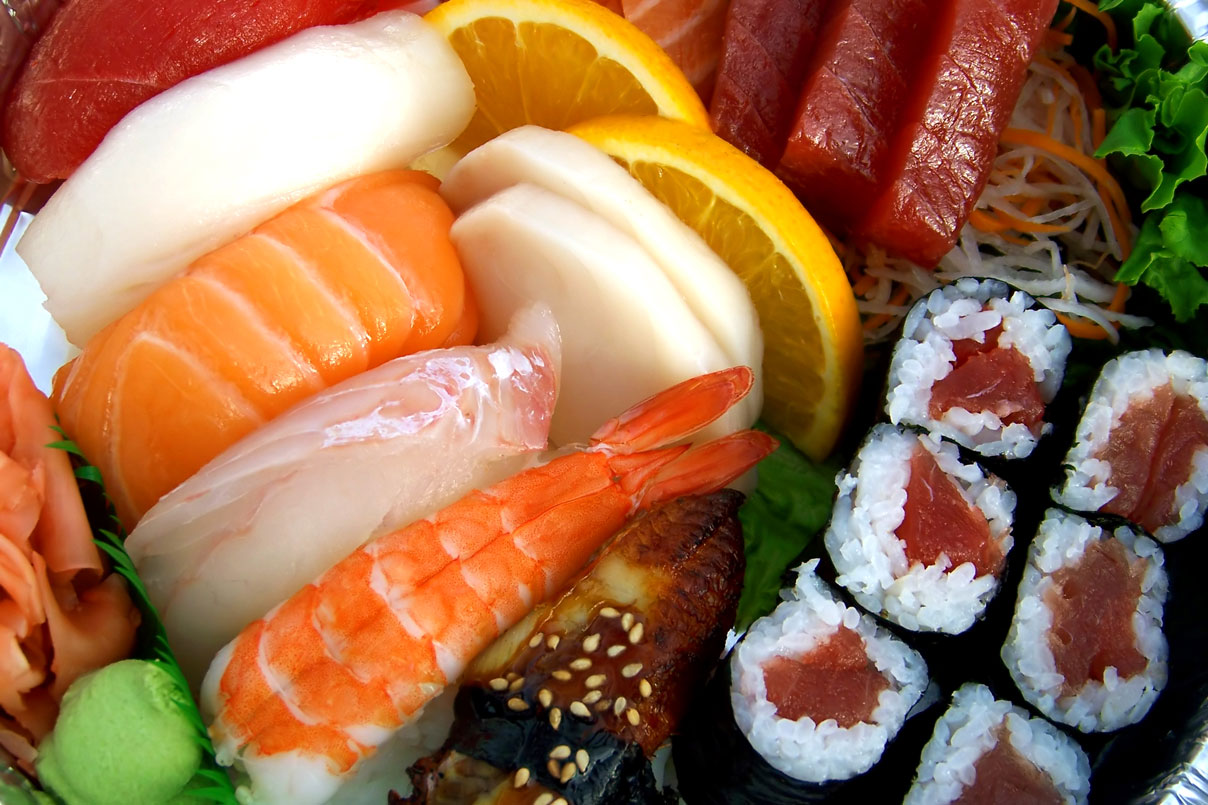 I discovered sushi when I was very young. Unlike most young kids, I actually liked sushi right away and since then I can’t get enough. I LOVE sushi, but not ALL sushi.

Sushi is a very delicate food and as such needs extra care and precaution for freshness, quality and… parasites! Not to scare you, but yes raw fish can have parasites which is why you need to buy it from a well-known restaurant that has an A rating with chefs who really care about the food they work with.

Sushi can be good for you!

In Japan, available in every High Street food store, and a lunchtime favorite among office workers, sushi could be providing more than a tasty lunch.

Scientists believe it is one of the reasons why the Japanese are among the most healthy people in the world.

On average, the Japanese diet – raw fish, vegetables and rice – contains only 30pc fat, most of it the healthier polyunsaturated variety, compared with 40pc in Britain.

As a result, their rates of heart disease are among the lowest in the world. Recently, scientists in Japan found that sushi dishes – flavored parcels of rice with raw fish and vegetables – could even protect smokers against lung cancer.

Professor Toshiro Takezaki, who led the study, says: ‘Japanese people love fresh fish, particularly sushi. We think that is why, even though the Japanese smoke as much as people in the UK, their rate of lung cancer is only two-thirds as high.’

The Cancer Research Campaign believes giving up smoking is the biggest preventive step, but says a high consumption of fresh fish and vegetables would lower the risk.

On average, each person in Japan consumes around 100 grams of fish every day, in forms such as sushi, tempura and sashimi.

The omega-3 fatty acids in fish are linked to heart protection and improved circulation.

However, fish are host to many parasitic worms, and some must be cooked to make sure all worms and their eggs are killed.

Rice is the staple of the Japanese diet. It is a good source of energy and provides a supply of protein. Long used by naturopaths to treat digestive disorders, it sometimes helps in relieving diarrhoea.

Highly refined white rice has fewer nutrients than brown. But brown rice contains phytic acid, which blocks the absorption of iron and calcium into the body.

This is the green paste, often served with sushi, that is the Japanese equivalent of English mustard.

Thought to cleanse the palate, wasabi could also have health benefits. Scientists in Japan have discovered compounds called isothiocyanates in the paste that can help prevent tooth decay.

Wasabi has also been found to aid cancer prevention and prevent blood clots, if eaten regularly.

The Japanese have been eating sea vegetables for centuries. They use seaweed in large amounts in their diet because of its concentrated mineral content.

Up to a quarter of Japanese food contains seaweed to boost flavour. In sushi, dried sheets are wrapped around rice and vegetables to form a mini-parcel.

It is rich in iodine – vital for a healthy thyroid – copper, calcium iron and magnesium.

A popular flavour-enhancer in sushi dishes, ginger is also taken to mark the end of one type of sushi during a meal before moving on to the next.

The spice is widely known to have therapeutic effects, not least in aiding digestion, and is often prescribed by naturopaths to ward off seasickness.

It is also thought to protect against respiratory illnesses and colds, as well as to ease flatulence and gripe. Chewing on ginger can relieve toothache.

A pilot study showed ginger could relieve the symptoms of Raynaud’s disease, which causes painful numbing of the fingers and toes.

Made from fermented soya beans, soy sauce is widely used in Japanese cooking. However, it has a very high salt content and should be avoided by anyone with high blood pressure or who has been told to have a low-sodium diet.

There are some definite benefits linked to a higher consumption of foods rich in soya.

It’s thought that they protect against cancer, cardiovascular disease, premenstrual syndrome and even osteoporosis. But it’s better to get the soya from milk or tofu.

Although rich in omega-3 fatty acids thought to help protect against heart disease, it is also high in cholesterol, so it shouldn’t be consumed in large amounts.

Caviar – sturgeon roe – is very expensive but is still high in fat. Typically, fish roe contain about 90 calories per 100-gram serving and are a rich source of protein.

There are likely to be only very small servings in the average sushi.

Because it is high in the purines that trigger gout, sufferers should avoid caviar.